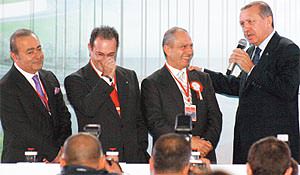 The foundation of Gebze – İzmir Highway has been laid

In the ceremony, our Vice Chairman Oğuz ÇARMIKLI speaking on behalf of Highway Investment and Management Co. that is composed of Nurol – Özaltın – Makyol – Astaldi – Yüksel – Göçay Companies stated that they took part in the biggest build-operate-transfer project since the establishment of the Republic of Turkey and they were aware of their responsibility with regard to the contribution of this project to Turkey.