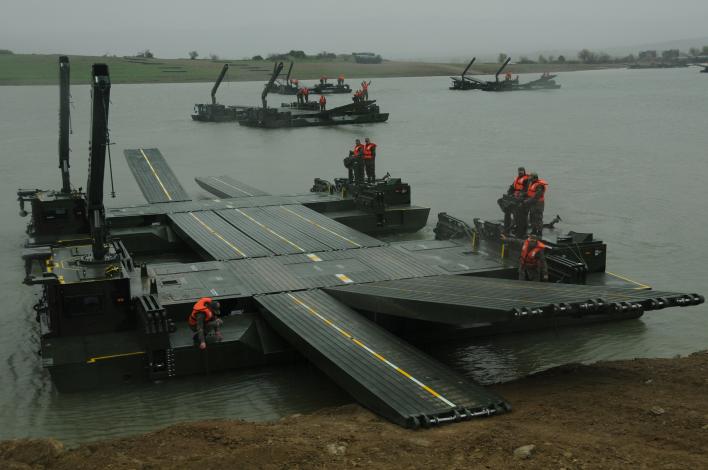 Mobile Floating Assault Bridge Vehicle Delivery and R&D Building Ground Breaking Ceremonies held by the largest exporter of Turkish Defence Industry and the leading company of Land Platforms, FNSS Defence Systems Co., took place in Gölbaşı facilities of FNSS Defence Systems on 14 September 2011 under the auspices of the Minister of National Defence, İsmet Yılmaz. Deputy Minister of National Defence Hasan Kemal Yardımcı, Undersecretary of Defence Industry Murad Bayar, related personnel from the General Staff and the Land Forces Command, bureaucrats and project executives from the Undersecretariat of Defence Industry attended the ceremony. 4 units of SYHK system that have successfully completed the qualification tests were delivered to our Land Forces Command in the first vehicle delivery ceremony on 14 September 2011. All SYHK systems to be produced within the scope of the project will be completed until the end of 2012 and delivered to the Land Forces Command. On the same day, the ground breaking ceremony of the new R&D building that belongs to the FNSS Defence Systems Co., which has been chosen as the “R&D Centre” within the scope of Law no. 5746, and that will be constructed by Nurol Construction and Trading Inc. was attended by Deputy Minister of National Defence Hasan Kemal Yardımcı, Undersecretary of Defence Industry Murad Bayar, FNSS Board Member Oğuz Çarmıklı and FNSS General Manager and CEO, Nail Kurt. The building will begin to operate in November 2012 and have a 6000 m2 closed area, and 150 engineers will continue designing and developing Turkish design vehicles in this building. The R&D building that will also include welding shops, prototype shops and necessary laboratories will take the design and product development capabilities a step further within the framework of FNSS‘ vision of becoming a world leader in its field.